I had dinner not long ago with friends who told hilarious stories about their parents who regularly turned a sugar dispenser upside down over their coffee cup and held it for 4-5-6 seconds. Or asked for half a cup of coffee and then filled the rest of it with milk.

Fundamentally, coffee is all about taste. Yours is yours, and no one should presume to challenge or change it. If you enjoy coffee with cream, sugar, or both, we believe that the beans you buy from us will produce the tastiest cup you've ever had.

Having said this, we all know people who mask the taste of foods or drinks that they don't really like with tastes that they do. Don't like scrambled eggs? -- douse 'em with catsup! Never had eggplant that you like? -- add more tamari! Salmon too fishy? -- pile on the tartar sauce and splash on more lemon!

Sometimes, people began using cream & sugar in their coffee because their first very experiences were so awful that this was the only way that they could stomach it. And then they got in the habit and just stayed there. If this is you, read on. 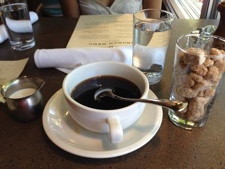 Whether you add milk or cream to your coffee to cool it down, or to add the flavor of milkfat, either way, a new taste has been produced. It's easy enough to test the first of these: wait for the black coffee to cool down a bit and see if you like it. If so, keep trying it. You may find that you prefer some coffees with, and others without, the added taste.

With regard to the complementary tastes of coffee and milkfat, in general, the rule of thumb is that adding milkfat works better with earthier and darker roasts Ifor instance, Sumatras) than lighter and brighter ones (for instance, Ethiopians). Why? -- because the longer roast that produces darker beans enhances their woody and earthy flavors. This process "burns off" their fruity, flowery and delicate tastes which, in general, are more noticeable in lighter roasts. But these are precisely the tastes that milkfat masks. So, the lighter roast enhances fruity flavors, the milkfat depresses them, and you're left with flat and soggy coffee. Suggestion: try lighter roasts by themselves and see what you think.

As with milkfat, some people add sugar to their coffee to mask an unpleasant taste (bitterness, presumably, although perhaps others as well), while others simply like to enhance the sugars already in the cup. The following is only for the first group.

First, try to determine which flavor(s) in particular stand out, and whether it might be possible to complement them without sugar. There's nothing wrong with sugar! The point, though, is that most coffee beans have relatively high Brix scores and hence do not need a lot of added sugars if properly prepared. If you add sugar to lighten up "heavy" or "woody" coffee tastes, try a lighter roast, and see if the results are pleasing. If the coffee tastes too acidic, ask us to hold it a little longer in the roaster, or try another bean altogether.

In addition to milkfats, milk also contains lactose, which is a sugar. If you typically add milk and sugar to your coffee, try milk only and see if you like the result.

Final points
First, adding milkfat and/or sugar to coffee is not a moral event! While the vast explosion of coffee drinking in the United States has accustomed many to richer and deeper coffees than their parents enjoyed, a lot of this coffee is enhanced by cows and cane. However you've enjoyed it up to now, consider a little experimentation to see if other tastes are just as pleasant. And who knows -- you may find that coffee has all of the flavors, depth, and complexity that you've always wanted, all by itself.

And second, a lot of people -- not all, but a lot -- began adding cream and/or sugar to their coffee to overwhelm the harsh and bitter tastes produced by bad brewing. Read our suggestion below about how not to do this.